Sarah B. (Bethia or Bayles?) Trowbridge 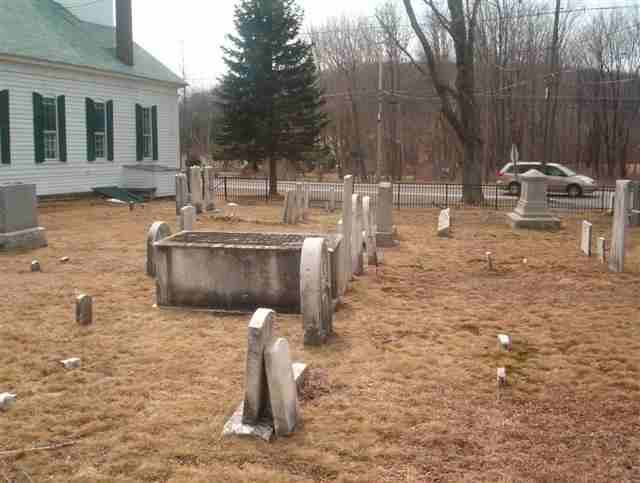 The Trowbridge family plot at the Mount Freedom Presbyterian Cemetery in Randolph, NJ. 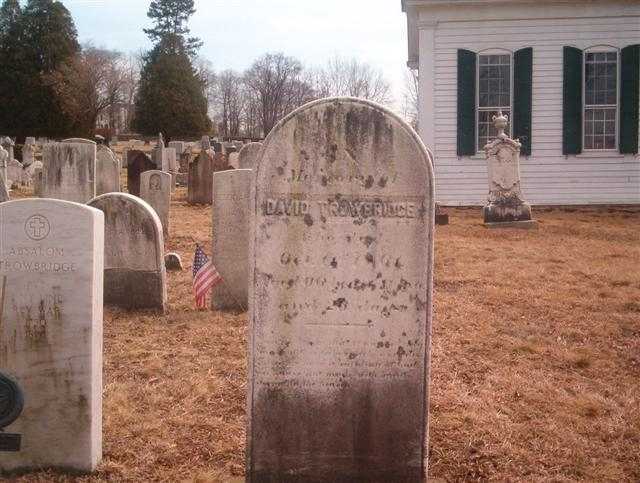 The headstone of David Trowbridge at the Mt. Freedom Presbyterian Cemetery in Randolph, NJ. 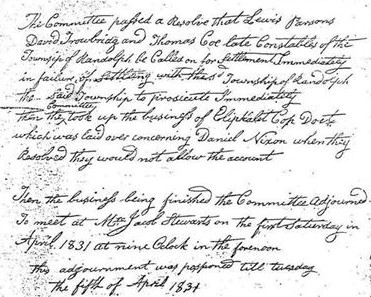 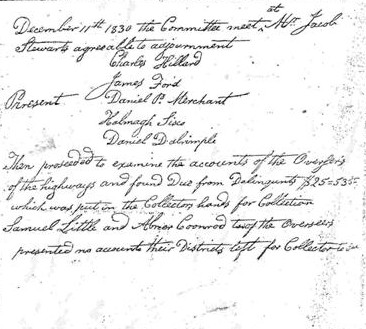 Minutes from the Randolph township council from the 1830s which mention David Trowbridge as a town constable.

When you think of a Justice of the Peace, you probably have visions of a hillbilly judge performing another shotgun wedding, or sending an outlaw to the gallows. While they did perform weddings, they only handled small claims and property disputes, with crimes like murder and robbery going to New Jersey Superior Court. Appointed for a five year term by the governor,   Being considered county officers, they also participated in the main governing body of Morris Co., the Board of Chosen Freeholders. According to the Minutes of ameeting of the Randolph council in 1830, David Trowbridge is mentioned as having served as a Randolph constable (see below).

THE TROWBRIDGES THEIR FINANCES

David was a poor money manager, owing  a mortgage totalling $2,000.00 when he died in 1861.  The bank foreclosed on his property, subdividing and auctioning off David Trowbridge's property, collecting most, but not all the money owed to them. David's widow, Anna, was not only left with the prospect of being homeless, but now had to go to court in Newark to pay the remaining $200.00. The Trowbridge family appealled to the only person in the family with the money to bail out Anna, Levi Dalrymple Jarrard, who was married to David and Anna's late daughter Jane Lewis, who died in 1847. Jarrard, a successful businessman in New Brunswick, displayed a generosity to Anna and the memory of his beloved late wife by buying up whatever pieces of the former Trowbridge property he could, and paid the bank the two hundred dollars still owed to them. Jarrard kept the property in his name, but gave David Trowbridge's house and a half an acre of property to Anna, who lived there for the rest of her life along with her son Eliphalet and daughter Mary Elizabeth, and  granddaughter Esther Ann Garrison, who for unknown reasons started living with her grandparents after the death of her mother Rebecca Trowbridge in 1846. She may have been adopted by David and Anna because in he 1860 census was listed as Esther Ann Trowbridge.  During these financial difficulties, it is possible that during the communications between the Trowbridges and Jarrard that Jarrard's eldest son, David, who was the only surviving son of Jane, may have been the courier. Esther Ann and David were married by the 1870 census. For more information on this, see the pages for Jane Lewis Trowbridge and David Trowbridge Jarrard 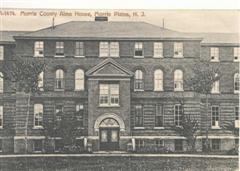 The Morris County Alms House on Hanover Ave. in Morris Township, around 1900. It was at this facility where Mary Elizabeth, her paternal aunt Ruth Trowbridge, and her nephew David Edwin Trowbridge(Edward Youngs' son) spent their last days. It seemed to have acted as a dumping ground for several elderly and mentally challenged members of the Trowbridge family, in a time when facilities such as the nursing homes and group homes we now take for granted were either nonexistent, or were woefully inadequite, such as the nearby Greystone Park Mental Hospital.

In the 1880 United States census, Anna Youngs is listed as being the age of 80, and living at house she shared with her husband David on Millbrook Avenue, with her middle-aged, unmarried children: Mary Elizabeth (who is listed as "keeper of the house"), Eliphalet Wells (listed as a laborer), and her 36 year old grandson, Charles Garrison (an engineer). According to a Beers property map from 1868, her house is listed as being located next to that of her son, David Austin Trowbridge, and survived until 2000, when it was acquired by Randolph Township and demolished to make way for Freedom Park. The nearby house that was built by David and Anna's son David Austin Trowbridge still survives and now houses the Randolph Museum.