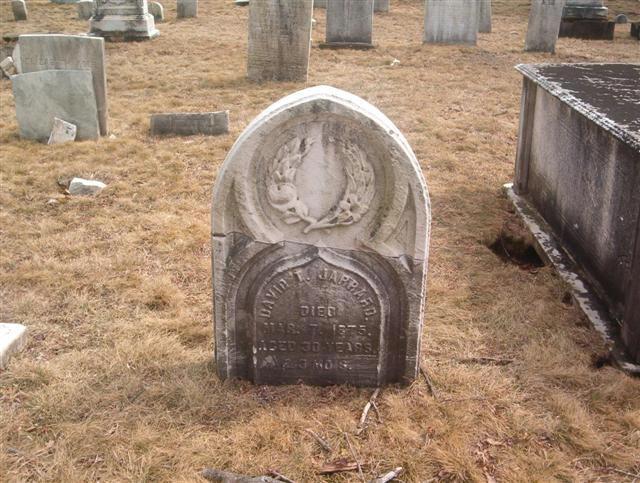 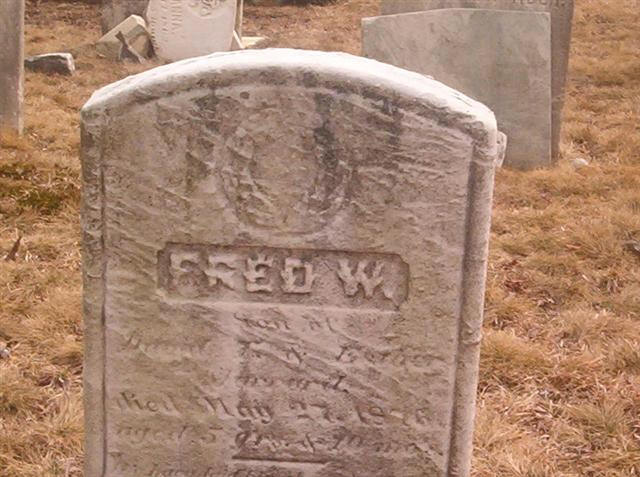 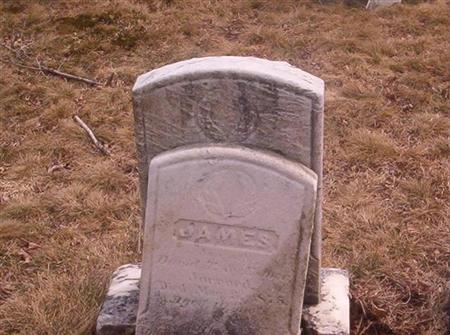 The headstones of David Jarrard and his sons Fred and James.

The relationship of David T. Jarrard and his first cousin, Esther Ann Garrison, and then her subsequent marriage to her uncle by marriage, William Frederick Hughson, is definately one of the most complex and intertwined relationships in the Trowbridge family in Mount Freedom. David T. Jarrard was born in 1845 the eldest child of Jane Lewis Trowbridge (daughter of David Trowbridge & Anna Youngs) and Levi D. Jarrard, a well to do shop owner from Sussex County (a cousin of Jane's sister-in-law, Eunice Dalrymple). Living in Mt. Freedom for a couple of years, David's parents had one more child, William Levi, who was born and died in 1847. Sometime between 1847 and 1848, Levi moved his family to Pearysville, Pennsylvania, where David's mother Jane died the following year, three days after giving birth to David's younger sister, Mary Jane Jarrard. Now a widower with two children, Levi remarried the following year, and sometime during the 1850s, moved his family to New Brunswick, Middlesex Co., New Jersey, where he ran a prosperous ship chandlers shop, where David spent his childhood. Esther Ann Garrison was the daughter of David's aunt, Rebecca Ann Trowbridge, and her husband, Paul Garrison, a farmer from Mount Freedom, Morris County, New Jersey. Rebecca died in 1847, possibly from complications from giving birth to Esther Ann. Her father remarried the following year, but Esther Ann went to live with her maternal grandparents, David Trowbridge & Anna Youngs <2 year old Esther Ann is listed in the 1850 census living with them at their farm in Mount Freedom). It is unknown why she lived with her grandparents, even though her brother and sister remained with their father and stepmother. She may have been adopted by her grandparents, because the 1860 census has her listed as "Esther Ann Trowbridge". David Trowbridge was a poor money manager, owing a $2,000 mortgage on the farm, which the bank foreclosed on the farm and put it up for auction. The Trowbridges must have appealed to David's father Levi for help, because Levi purchased several acres of the property that was put up for sale, which he kept the deed in his name, but allowed Anna Youngs Trowbridge to remainin her house, along with a half an acre of land. Even though he was now in possession of several acres of former Trowbridge property, Levi remained in New Brunswick, where he continued to run his business, and later became state senator for Middlesex County in the 1870s. This may have been the catalyst that brought David and Esther Ann together, because David also purchased a few acres of his grandparents foreclosed property. David and Esther Ann married sometime between the 1860 and 1870 census, (in 1860, David was listed as living with his father's family in New Brunswick). By the 1870 census, David and Esther Ann are listed as living in New Brunswick, Middlesex Co., New Jersey, where David lists his occupation as "grocer". David owned a store near the shop of his father, Levi, who may have set him up with a new business. They were married after1864, because Esther's name shows up on the list of members of the Mt. Freedom Presbyterian Church in Morris Co., although she and David could have been courting her before 1864,  because in 1863 David's half-sister, Esther Ann Jarrard was born, and presumably named after  her future sister-in-law.. Probably married in New Brusnwick, beginning after the 1870 census, David and Esther Ann had three sons, Fred W., James, and Levi D. before moving to Mount Freedom by 1874. They may have settled on lands owned by Levi and David.   Whatever happiness the couple enjoyed came to an end in 1875-76, when within a 12 month period, two of their sons, Fred W. and James died, and  David, perhaps from an epidemic of some kind. Left a widow with one surviving son, Levi, Esther Ann married her former uncle, William Frederick Hughson, who had been married to d Esther Ann's maternal aunt, Sarah B. Trowbridge, who died in 1874. A widower with three children, William and Esther Ann raised their combined family, along with the three children they subsequently had together on a fin the home of Anna Young Trowbridge, along with Esther's brother Charles, and her aunt Mary Elizabeth and uncle Eliphalet Wells Trowbridge (both were apparently mentally challenged), where they are listed in the 1880 census. This union brought together the most complicated family relationship with the Trowbridges and the extended family. This household now consisted of descendents of three of the four daughters of David Trowbridge & Anna Youngs: Esther Ann, the daughter of Rebecca Ann Trowbridge, Levi D. Jarrard, the grandson of Jane Lewis Trowbridge, and the children of Sarah B. Trowbridge, with another duaghter, Mary Elizabeth, living with them. As far as blended families go, William and Esther Ann put this family into the blender, and set it on puree. First cousin marriages were common in the family, but this is the most complex and intertwined family ever listed in the annals of the Trowbridge family. But unlike these other cousin marriages, the children did well for themselves, most notably the son of William and Sarah B. Trowbridge, Orion, became a prominent Morristown undertaker, and took his half brother Solon under his wing, and Etta later relocated to Washington, D.C. for some unknown reason. Esther Ann probably died sometime before 1900, because her name does not appear in the 1900 census, with daughter Etta Hughson still living in David Trowbridge house with her aunt Mary Elizabeth, and her father William Frederick living in Morristown with his sisters, along with their youngest son, Solon. Esther Ann and William Frederick were buried in an unmarked graves next to that of Sarah B. Trowbridge in the Mount Freedom Presbyterian Cemetery, in Randolph, New Jersey.
Home