Charles W. Trowbridge
The headstone of Charles A. Trowbridge at the Mt. Freedom Presbyterian Cemetery in Randolph, NJ.

A woodchopper and laborer, Charles married the Delilah or Delia sherman, the widow of civil war veteran Hudson Gillen., He continued to live in Randolph with Delilah, her daughters by Gillen, and their children together at least by the 1880 United states census. It is unknown what section of Randolph they lived at, although the Morris County USGenweb site has a transcription of notices from the The Iron Era Newspaper from 1881 which mentions that the house of a Chas. Trowbridge in Shongum burned down on March 3, 1880. It is unknown if this was Charles Austin Trowbridge. Other Charles Trowbridges residing in Randolph at the time include Charles Austin's uncle,  Charles Lewis Trowbridge, and a distant cousin, Charles Wesley Trowbridge, the son of Augustus B. Trowbridge. One interesting coincidence was that the house of Delilah's former father-in-law, Charles A. Gillen,  who also lived in Shongum, had a house that burned down the same year.

Working as a woodchopper and laborer, Charles Austin became a farmer when he purchased the property of his father David Austin Trowbridge on Jan. 16, 1888 for the sum of $1,000 (see deed below), and assuming the mortgage.  Nine years later, in 1897, Charles defaulted on the mortage, and the bank put the property up for auction. In Aug., 1897, August Cutler of notorious real land speculating farmily, bought the farm from the winning bidder of the auction, sold the property to the Thockmorton family sometime before 1900. Eventually the farm in turn was sold by the Throckmortons to New York stockbroker, and soon to be prominent Randolph resident, Charles Brundage, founder of Brundage Park in Randolph,in 1929. 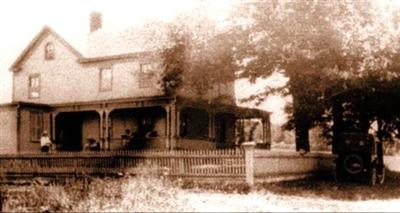 The Brundage-Trowbridge house.
Above picture from Randolph Historical Society.

DEED BETWEEN CATHERINE C. & DAVID A.TROWBRIDGE
AND THEIR SON CHARLES A. TROWBRIDGE


The pension application of Delilah Sherman, whose late first husband, Hudson Gillen was a Civil War veteran. The application was approved.