It is because of Caleb Fairchild that the Trowbridges came to northern New Jersey, and then by way of David Trowbridge, Caleb's stepson, that the Trowbridges spread through the United States. Caleb was a respected member of Hanover, New Jersey, where he and Anne settled, and raised her children, as well as the several they had together. According to New Jersey Archives, Caleb was in New Jersey as early as 1730. His last grantor deed in Stratford was 18 April 1722 (41A). One of Caleb's descendants said he went from Stratford to Stonington, Connecticut, then to Hempstead, Long Island, New York, and then to New Jersey. He also at one point briefly in the New Haven, Connecticut area, and is on the deeds there. On April 1, 1736, Caleb and Anne quit-claimed land to David Trowbridge, son of Anne's first husband, Joseph Trowbridge. Caleb, Anne, and Caleb's brother Zacheriah were among the founding members of the Morristown First Presbyterian Church. One of Caleb’s sons, Abner Fairchild, and Abner's son Abraham, fought in the Revolutionary War. Anne, Caleb, and their son Ezra died during an outbreak of smallpox (which also claimed the lives of several Continental soldiers) in the spring of 1777.

A depiction of the historic original First Presbyterian Church in Hanover.
Founded around 1715, it was the first church in what is now Morris County, NJ. 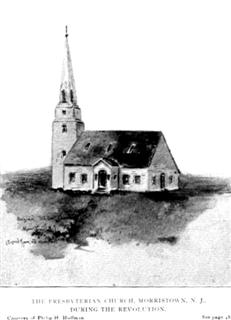 The historic Morristown First Presbyterian Church. Caleb and his brother
Zechariah were founding members and leading elders in the church.

EXCERPTS FROM “ALONG THE WIPPANONG: A HISTORY OF HANOVER TOWNSHIP”

By Elizabeth R. Myrose and Claire B. Kitchell
"But the mills and forges were the lure that would bring settlers from the east and the north, and which would finally give Whippany (then part of Hanover) its reputation. The mills also produced the leading families of the township. The first of these were the Fairchilds. The family patriarch, Caleb Fairchild, arrived in Whippany in 1735, with his brother Zachariah, and his wife Anne, and established a gristmill and a saw mill on the tract of the orignal forge and property now occupied by the International Paper Co. (now since gone). A member of the Presbyterian Church in Hanover for a number of years, he and Anne were also founding members, along with Zechariah, of the Morristown First Presbyterian Church in Morristown. Caleb also served as Morris County Sheriff from 1746 to 1748. He died on May 1, 1777 at 84 years of age. Caleb's son Abner was a Captain in the Army. Abner had seven sons who were patriots. Abraham Fairchild, grandson of Caleb, also an Army Captain, followed in his grandfather's footsteps. On the site of Caleb's saw mill, Abraham established a very successful woolen mill. On Stoney Brook in Malapardis, he built a carding machine and fulling mill, the first in this section of New Jersey. Abraham Fairchild was a social as well as business leader of the township. His mansion on Jefferson Road drew notables from all parts of Morris county. Abraham's son John sold the family interests in other plants, but retained the fulling mill and took over its management. John's son, E.R. Fairchild, and grandson, A. K. Fairchild, carried on the operation of the company until 1890, a span of a century of family ownership. In the post-Civil War period, with machinery purchased from New York State Prison, the plant turned to the manufacture of woolens."

ABSTRACTS FROM THE WILL OF CALEB FAIRCHILD

Fairchild, Dabriat (Deborah)--25/12--d. 13 Apr 1757, age 50. [Ed. Note: Wife of Zachariah, the First Leading Elder of the Church upon separation of the Morristown Church from the Hanover Church in about 1737. Vail spells the name Dabriah. CR69 show Deborah, 1st Wife of Zachariah Fairchild of Morris Plains. Deborah & Zachariah were parents of two i.e., David and Abiel. CR69 show "Dabriat" on the headstone].

Fairchild, Sarah--29/23--Wife of Matthew, d. 6 Jan 1750, age 33. [Ed. Note: Parker shows originally copied 1756 and corrected with Church Records. CR71 show Sarah _______ was the 1st Wife of Matthew Fairchild. Matthew remarried two more times. He is shown Father of ten i.e., Caleb, Ruth, Ann, Sarah, Stephen, Asher, Jonathan, Theodocia, Rebecca, and Mehitabel. Based on the dates of Baptism, Sarah would have been the Mother of the first five. Based on the date of Matthew's third marriage, the last two would have been by his third Wife. It is unclear which of Matthew's Wives i.e., #1 or #2, was the Mother of which of the three remaining children i.e., Asher, Jonathan, and Theodocia].

Thomas "Fayerchild", merchant, came from England, and was among the first settlers of Stratford, (mow Bridgeport), CT. His wife Sarah, was a daughter of Robert Seabrooke, who had daughters who married Thomas Sherwood, William Preston, of New Haven, and Lt. Thomas Wheeler, of Milford, respectfully. All came to Connecticut about the same time in 1638 or 1639.

Apparently Caleb Fairchild was not a particularly good sheriff during his tenure between 1746 and 1748. An incident involving Sheriff Fairchild can be read at the the Pipes family webpage about counterfeiting in Morris County during colonial times, which Caleb allowed an alleged counterfeiter to escape from jail, perhaps in collusion with the suspect's ring.