A farmer by trade, Augustine owned a 200 acre farm, which had a cooper shop that repaired wagon wheels. According to a tax assessment taken in 1798, Augustine owned 74 acres of land, with 68 acres improved, 2 buildings and or outhouses valued under $100, with total value of about $450.


FROM THE BIOGRAPHY OF AUGUSTINE'S GRANDSON, SAMUEL FREEMAN PIERSON

From "The History of Morris County New Jersey, Volume III, Lewis Publishing Co., 1914
"...Austin Trowbridge, was born April 19, 1767, and died June 7,1845. His wife, who bore the maiden name of Elizabeth Freeman, was born May 18, 1775, and died April 25, 1845. Mr. Trowbridge was a farmer by occupation, and was a well known citizen of the community in which he made his home. He was the owner of a clock, which is now in possession of our subject [Samuel F. Pierson], and, although more than a hundred years old, it is still in good running order."

The following is information my mother copied from a letter my cousin George Nas received from a Mrs. M. Rockwell of Morristown from the Wheeler family bible, who are descendents of Augustine Bayles Trowbridge, as well as other genealogical information back in the early 1980's, when George was working with the Ferromonte chapter of the Daughters of the American Revolution to place a headstone on the grave of Absalom Trowbridge in the Mt. Freedom Presbyterian cemetery in Mt. Freedom, Randolph, Morris County, New Jersey:

October 1, 1792 Unrecorded deed $20
Ruth Witchell
wife of Jacob Witchell
late Ruth Lofey]
of the first part of Morristown
Auguston Bailey Trowbridge of Hanover Tp. of other part
Witnesseth that the said Ruth Witchell previous to her marriage with the said Jacob for consideration L20-conveys all that tract or lot of land whereon the sd Jacob & Ruth now dwell on Whatnung Mountain in Morristown of sd adj the road. Beg at the post in the road 86 links on course N67 E from a spring that puts out in the said road 88 links from a foot rock in said road the (1) S58 R 5.00 ch(2) N 32 W 2.00 ch th (3) N 58 W 5 ch th (4) N 32 E 2ch to Cant 1 Ac Strait.
her mark.rk
Ruth X Witchiel
his mark
Jacob X Witchiel
Witnesses
John Kirkpatrick, Elizah Taylor, Absalom Trowbridge

THE OBITUARY OF ELIZABETH FREEMAN IN THE MORRISTOWN JERSEYMAN ON MAY 28, 1845

On the 28th ult. on Trowbridge, wife of Mr. Augustin Trowbridge. Mrs. T's death was very sudden and unexpected. In the afternoon she was in this town, apparently in her usual good health. Soon after she came home he left the house, but returned in a very few minutes, found her in a chair, in the agonies of death. He laid her on a bed; she died in a few minutes.

FIRST PRESBYTERIAN CHURCH OF MORRISTOWN THROUGH THE YEARS 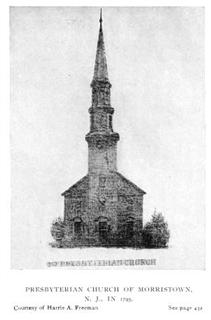 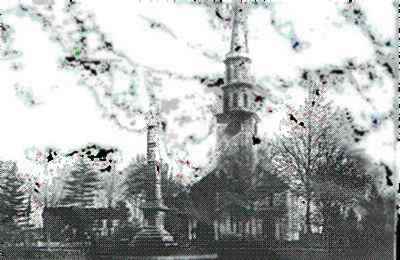 The historic First Presbyterian Church of Morristown as it appeared in during the Revolutionary War (above)
1795 (middle) and the 1800s (bottom). Augustine and Elizabeth were members of this church. 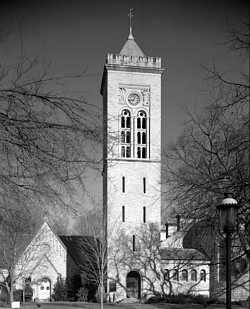 First Presbyterian today as it has appeared after the last renovation in the late 1800's.

Augustine Trowbridge, his wife Elizabeth, and grandson William Harvey, were buried in the Old Presbyterian Ground in Morristown, New Jersey. The Combined Bills of Mortality, which was kept by first by Dr. Timothy Johnes, (minister to the Presbyterian Church) for the Presbyterian and Baptist congregations, and then by the Presbyterian Sexton, William Moses Cherry, between 1768 to 1806. The list includes Augustine's son John Ross, his father Shubael, his grandparents David and Lydia, and his great grand mother Anne Trowbridge Fairchild. While Augustine's great grandmother Anne was an exception being buried in the Whippany Burial Ground in Whippany, which was next to her home at the Fairchild mill, his son was probably buried in the Presbyterian Cemetery, and the others were probably interred in the nearby Morristown Baptist Cemetery. This cemetery was sold by the Morristown Baptist Church to a developer named McAlpin in the 1880s. McAlpin then moved the gravesto Evergreen Cemetery on Evergreen Road (now Martin Luther King Boulevard) in Morristown. It is unknown if their remains were moved there, and their names do not show up in Evergreen Cemetery records, so their graves may be lost forever. The graves of Augustine and Elizabeth, as well as their grandson William Harvey Trowbridge (son of Elijah Freeman Trowbridge) are located in the cemetery behind the first cemetery gate on the left when you approach from Park Ave., behind the sanctuary of the church. Augustine's headstone is on the ground, with William Harvey's headstone stacked on top of it.tPresbyterian Burying Ground behind the church. Although other Trowbridges maybe buried in the cemetery, possibly Augustine's daughters Joanna and Lydia, the headstones of Augustine, Elizabeth, and William Harvey are the only Trowbridge headstones still standing there. 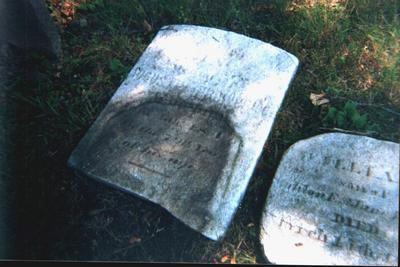 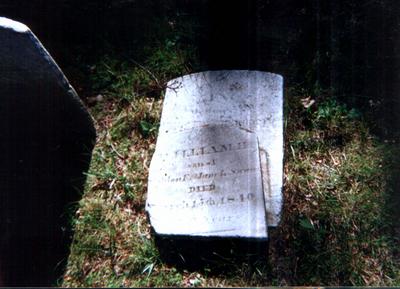 The headstones of Augustine Trowbridge (with another headstone stacked on top of it).

The picture on the right is a close up of Augustine's headstone. 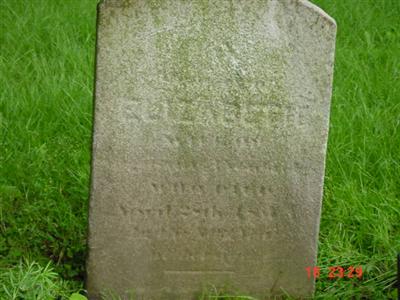 The headstone of Elizabeth Freeman.
(Photo courtesy of Angela Dethloff.) 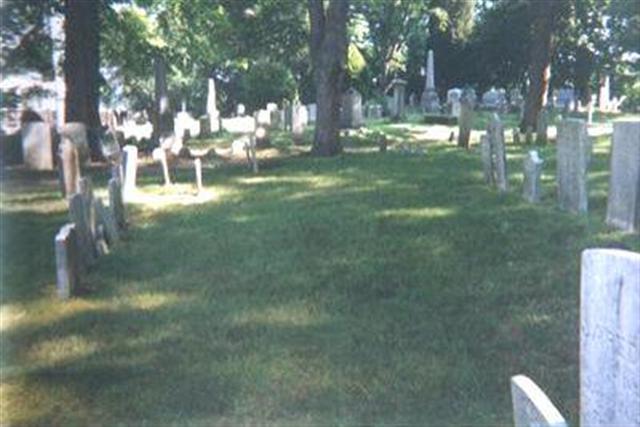 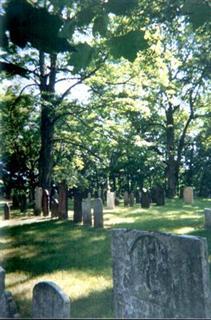 EXCERPTS FROM "WHOSE WHO IN THE PRESBYTERIAN BURYING GROUND, MORRISTOWN, NEW JERSEY"

Augustine Bayles Trowbridge was named after his Uncle Augustine Bayles (his mother Marys brother), who named him as a beneficiary in his will:
1782, Jan. 14. Bayles, Augustine, of Morristown, Morris co., will of. Wife Kezia, all personal estate. Brother William, 50 pounds. Adopted daughter Rebecca Morris, now wife of Timothy Goble, my homestead, of 125 acres, after death of wife. If Rebecca should die, then I give her part to my nephew, Augustine, son of my sister Mary, now wife of Shubael Trobrige. Niece, Kezia, daughter of Mose Pierson, and my adopted daughter, 76 acres, which join Joshua Guies in; and if Kezia die before age, then her part I give to Benjamin, son of my sister, Hannah Hathaway. Executors: Wife, Kezia, and my brother, William.
Witnesses: Bethuel Norris, Timothy Johnes, Libbeus Norris.
Proved March 1, 1782 Lib. M. p56