We are expecting awesome march in Flint this year.

Noon-Dusk including 9 musical acts, speakers, and a 4:20 march to City Hall

First Saturday Of May 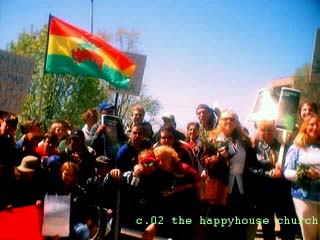 fill every corner-the more you want to march, the closer to the park

Focus on corners and traffic, stay on the sidewalk.

Proceed to the Municiple Bldg at 12:30

1 to 2 at Riverside Park: Speakers and Bands

The Caravan for Lansing/Detroit must depart Before 2

NO POT SMOKING UNDER THE BRIDGE!!!

This is not a "Smoke Out"
Leave your pot at home or in your car
But bring your cleaned Bongs, papers, rolling tobacco and herbal blends
just in case you wanna burn something.

Anti-Marijuana Zealots:
Please don't come and fight with us in the streets of Flint. Peaceful protest, please.

*For Auction*: 2002 March Poster signed by
Micheal Moore, Steven Hagar, or Adam Brooks
(bidding starts at $1000, I'd like to keep them, but will give it to the highest bidder for the movement)

Canabis Culture Magazine
for the stuff to pass out at the event event!!! A few issues of CC#42(may) still available

Teasers & Deja Vu
For Hosting our Fliers, and potentially for supplying MARIJUANA CHEERLEADERS!!

Partial interview on tape for $4.20

Rev Right-time
and the First Cuzins of Funk
for.... just being where...and thanks for leading me to MoDoggies in Fenton!

Flint Green Party
Thanks for contesting my two issue candidacy for the 84th Seat of the State House
--Corruption supports the War on Marijuana, We can not conqueor "drugs" or terrorism,
until we destroy the corruption that encourages them. We need a "War On Corruption"!!!
---Rev Happy

The Michigan Libertarian Party
for providing the first confirmed speaker

The Flint Journal
For printing an Article on the March in the Monday, April 29th,2002 issue

Hey hey, Ho Ho, these racist laws have got to go

The "You Are My Sunshine song"