"Mr Thomas Trowbridge the elder of Taunton, merchant tailor, founded his charity by deed of 4 Dec. 11 James I (1613)."

EXTRACT FROM THE SOMERSET ARCHAELOGICAL AND NATURAL HISTORY SOCIETY, VOL. 119 (1975)

The house now known as the Tudor Tavern, no. 15 Fore Street (the Thomas Trowbridge house in Taunton) is acknowledged to be the oldest surviving domestic dwelling in Taunton. Its main structure has been dated to the 14th century. 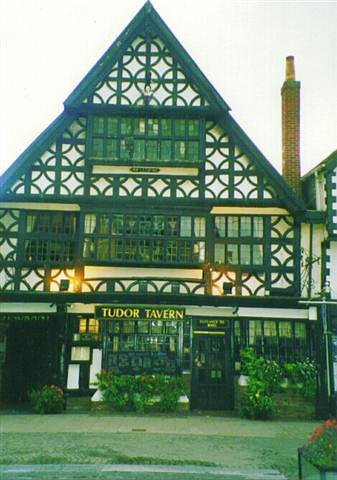 Beneath the front window on the second floor of no. 15 is a board inscribed T.T. 1578 I.T. These initials can be identified as those of Thomas Trowbridge, described variously as a mercer or merchant tailor, and his wifeJoan. Trowbridge stated in 1610 that he had held the premises for nearly thirty years. (Note, on Thomas wife, was her name Joan or Johanna? Somerset Record Office, DD/PM, box 7, makes mention of the facade panelerected by Thomas Trowbridge, this reads: T.T. 1578 I.T. Thomas and Johanna or Johane Trowbridge - (the letters I and J being interchangeable at that time). Thomas Trowbridge or Strobridge was buying up a number of properties within Taunton Deane manor from1572 onwards. The remodelingo f th e Fore Street property was evidently carried out at the commencement of Trowbridge's lease, and his involvement in the commercial life of the town is indicated by his purchasing five successive licences to prosecute for debt beyond Taunton Deane manor court between 1579 and 1584, and taking a lease for six years in 1585 of the right to prosecute any tenant for debts over 40s.Thomas Trowbridge used the shop at 15 Fore Street for the trade of selling "Mercerye wares" and evidently lived with his family behind and above his business. Thomas' only son, John Trowbridge, baptized at St. Mary Magdalene on March 25, 1570, became a wool merchant and took a shop next to his father, probably that on the west (no. 16). The two shops was beneficial to both father and son: "by reason that such as come to the one shoppe to buye cloth wil be and are incited to buie the mercery and silk wares and other requisites of convertinge the same cloth into apparrell, and those that came to Thomas' shop to buye the mercery comodityes of apparell would be and have been incited the sooner to buye their woollen clothes at John's shop". Thomas Trowbridge retired from his shop at 15 Fore Street around 1606, and sub-let it to Benjamin Cosyns, another Taunton mercer. From the will of Thomas Trowbridge (dated July 6, 1619, proved May 6, 1620; he was buried at St. Mary Magdalene Feb. 20, 1619/20). The will refers to the furnishings and fittings of his Fore Street house. To his nephew, Thomas Trowbridge, he left: "...the three great chestes in the shoppe, sixe greate ringed boxes, one case of small boxes, one fayre glasse boxe, with all the shelfes in the shoppe, the great spruse chest in the hall, one table borde and forme in the hall with all the seilinge and benchinge, and boards under feete in the hall, twelve platters in the buttery, with sixe candelstickes, one bason and ewer, the chayre in the hall, and all other things belonginge to the hall. To his kinswoman Joan, wife of Stephen Parrye, he bequeathed the square wroughte table boarde and frame standinge in the dyninge chamber, and the carpet twroughte with copper, and cruellbelonginge to it, the cypers cheste in the Rayne chamber, the bedsteade wherein I lye in the Rayne chamber,performed with feather bed, boulster, pillowes, the second best coverlette, and curtaynes and sheetes, my best guilt salte, the eleaven silver spoones with rounde knobbes and the newest wharminge panne. His station in life is indicated by bequests to Richard Mercer,schoolmaster of the castle school in Taunton, to Richard Davies, vicar of St. James, Taunton, to his overseer and good friend, the Rev. JohnClarke, D. D., and tothree servants.

In March of 2005 I received the following email from Rosa of Maryland:

"My name is Rosa and I live in Patapsco Neck Baltimore County, Maryland. The area I live in is very historical. I can look out my back window and see the Historic Todd House. Thomas Todd settled here from Gloucester County, VA in 1664. His family was from England. From there they settled into our area and built the Todd House. The original foundation was brick that was sent from England.
The reason for this email is that my friend, Vince, acquired a brass door knocker from Todd House. The inscriptions on the knocker are as follows:
The front: Taunton
Tudor House
Ya Odds HG Halliddy, ltd. Ye Enos (bottom line may not
be exact)
1578 is on handle


We are very interested in making a connection to anyone who may know more about this door knocker. I looked up the name Tudor House in Taunton England and saw a picture which looked exactly like th e knocker. This was on your website. We were very excited!!!

I am attaching pictures of the door knocker. If there is any information you can give to us or refer us to someone regarding the Tudor House (Tavern) as to originality, why it came to America to be in the possession of the Todds, is their a connection between the Todd family and the Trowbridges, is this door knocker registered in England. We are just so curious as to why Thomas Todd would have this door knocker on his house. Any information you can give to us would be appreciated. Thank you. 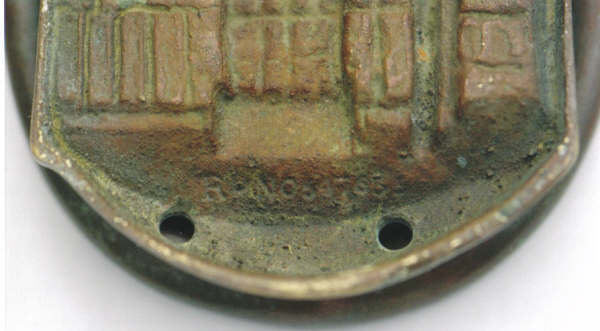 Detail of the inscriptions on the knocker. 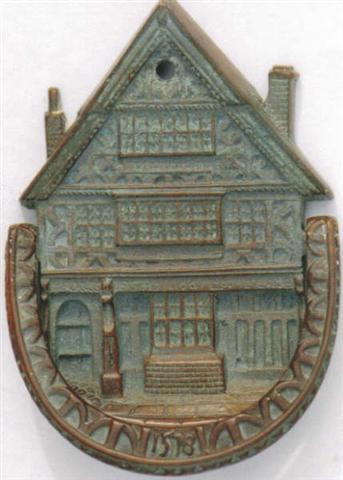 Front. Note how it matches the Tudor Tavern pictured above. 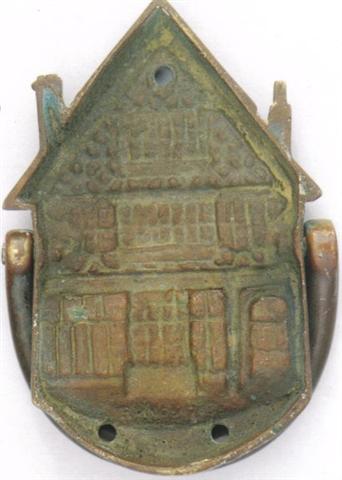 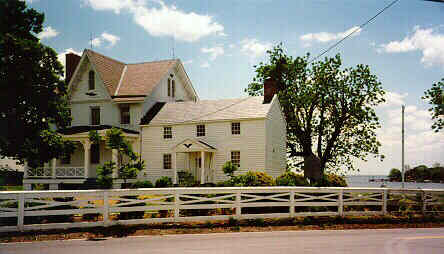 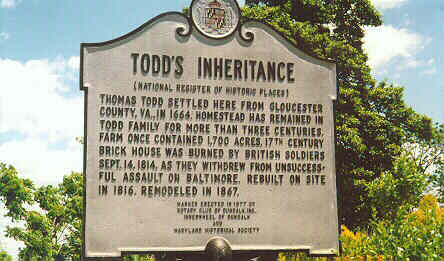 Above is the house that the knocker came from. I forwarded the email to Trowbridge genealogist, Charlie Scott, a descendent of David Trowbridge II, who was able to shed some light regarding the possible history of the door knocker:

"The Tudor Tavern once (1578-abt 1630) was the home of the Trowbridge Family. They also operated a woolen mill out of the building. It also was used as a courtroom during Oliver Cromwell's uprising against King Charles of England. Thomas Trowbridge came to America and settled in New Haven, Conn. When the war started, he went back to England to support Oliver Cromwell. In fact, he was an officer in Cromwell's Army. I suspect that he brought the door knocker to his home when he came to America. He owned land near the ocean, and it backed up to property owned by John Todd. When he went back to England, he left his three sons with a guardian who stole the family blind. Once again, I am guessing but I suspect that the door knocker was either left on the home when the family died out or when they sold their belongings because of finances. 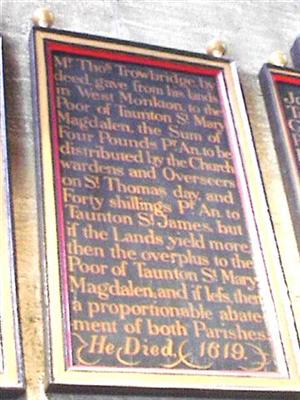 This plaque commemorates the donation of land by Thomas Trowbridge to the Church of St. Mary Magdalene in Taunton, England. Thomas Trowbridge's principal legacy to his town had been arranged before his death, in 1614,when he assigned six acres of land in West Monkton for the benefit of the poor of the parishes of St. Mary of Magdalene and St. James. 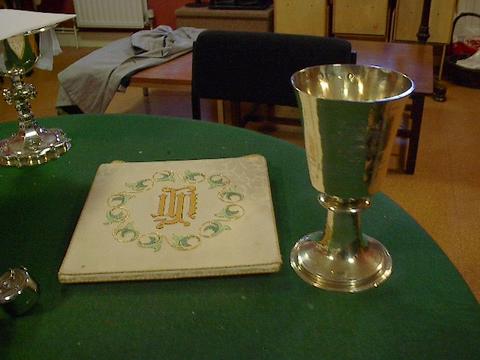 The Communion Cup at St. Mary Magdalene's Church in Taunton England dates back to the middle of the 16th century, and may well of been used by Thomas Trowbridge when he attended mass.

John Trowbridge took a lease of his fathers house probably in 1620, and a reversionary lease of the property was granted on Oct. 16, 1628 to John's son John Trowbridge junior, woollen draper, for a rent of 53s 4d. This showed that the house was to be held for 99 years or the lives of his son, his wife Judith, and his brother James, and also that John Trowbridge (I) had given up his adjacent wool shop, the burgage on the west being occupied by Edith Woodroe, widow, and that on the east, under the Portmans, by Elizabeth Hurley, widow. This reversion never operated as John Trowbridge (II) died in 1630, before his father. John Trowbridge (I) was as prominent a man of business as had been his father. Monies collected in 1611 for the relief of plague victims at Minehead and Dunster were brought to his house, and in 1625 he supervised the repair of the Taunton house of correction, and provided a field at West Monkton for tents to quarantine travellers suspected of bringing the plague from London to Taunton. He was regularly church warden of St. Mary Magdalene, twice mayor of Taunton in 1629-30 and 1637-8, traded with London and Bristol, and apart from lands in the vicinity of Taunton, also held property in Strogursey and Cannington. He also arranged ommercially important marriages for his children. His son John married the daughter of a Lyme Regis merchant, his son Thomas wedded the daughter of John Marshall, successively sheriff and mayor of Exeter, and his daughters were married to other merchants of both Taunton and Exeter. Thomas Trowbridge, son of John (I) placed his eldest son, John (III) under the care of his father and left Taunton for Exeter and sailed with his family (1636) to New England. He returned to England before 1641, was living at Taunton in 1663, and was buried at St. Mary Magdalene on Feb. 7, 1672/3. Thomas's eldest son John Trowbridge (III) predeceased him in 1653/4, his younger sons remained in America, and thus death brought to an end the Trowbridge connection with Taunton.