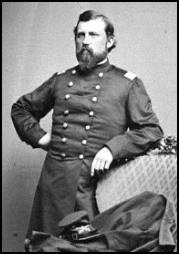 Luther Stephen Trowbridge was educated in public schools and at Yale University. He later studied law in office of Hon. Sidney D. Miller, Detroit, and was admitted to the bar. Practiced law in partnership with Hon. A. W. Buel, 1859-62, at the outbreak of the Civil War, Luther entered the army as a Major in the Fifth Michigan Cavalry, 1862. Later promoted first to lieutenant colonel Tenth Michigan Cavalry, 1863, Colonel in 1864, Provost Marshal-General, East Tennessee in 1865. Luther took an active part in pursuit of Jefferson Davis, and on return to Tennessee, was assigned to command of the cavalry brigade of East Tennessee and remained until close of war. Luther was brevetted brigadier general and major general, Sept. 1, 1865 for faithful and meritorious services during the war. He was appointed inspector general of state troops by Gov. Bagley, 1873, served as collector of internal revenue, 1st Michigan district, 1875 to 1883; Controller City of Detroit, 1883-85.  He later resigned to become vice president of Wayne County Savings Bank, became private secretary to Hon. Luther Beecher, 1887, and after death of Mr. Beecher was appointed one of the administrators of the estate. He was also the Treasurer for the Detroit College of Medicine for twenty years;& U. S. appraiser in Mar., 1903. Party affiliation was Republican. He was also a Member, Loyal Legion, G. A. R.