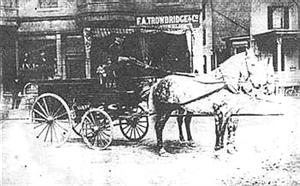 Fire Chief Fred Augustus Trowbridge poses in front of his store with the horses "Tom & Jerry" around 1900. 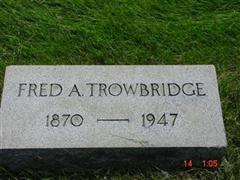 county, and State. He lived and died in Morris Plains, at the age of sixty-four, his death being universally regretted. In his young manhood he married Nancy Lindsley, in Morris county, who, like himself, was an old,  long established and highly respected family of New Jersey. She outlived him by many years, and died at the  age of seventy-two, in Boonton. Their children were: a daughter, Louise; and two sons John Thompson and Edwin, the latter a master mason and builder of Newark, New Jersey.

John Thompson Trowbridge was born at Morris Plains, Morris Co., New Jersey, July 7, 1841, where he grew to man’s estate. When about sixteen years of age he began teaching in the public schools, teaching at Brookside,  Morris Plains, and several different schools in Morris township and a great number of the present older  Morristown, Morris Co., New Jersey business sat under his tutelage. After several years he removed to  Boonton, New Jersey. After his marriage he moved to Morristown, Morris Co., New Jersey, and ten years later changed his place of residence to Boonton, where he established himself in the stationery business, which  he conducted for years, retiring only in 1911. He now makes his home in Boonton, having earned a well  deserved rest after forty years in the stationery business, which he managed with unusual ability and foresight.  He married Edna Pierson, a daughter of Samuel F. Pierson, a resident of long and high standing in New Jersey,  whose family also helped in the up-building of the State, first as a colony and then as one of the sisterhood of the United States. Mr. Pierson acquired a large property through thrift and close attention to business, and was  one of the well known wealthy farmers of that section of the State. He was one of the early public surveyors,  and knew more of the ancient and historic landmarks of Morris county than any other man. He was  affectionately called "Uncle Sam" by those who knew and loved him. The children of John Thompson  Trowbridge and his wife are: Edna Louise, now the wife of Melville C. Van Ness, of Paterson, New Jersey; and  Fred Augustus Trowbridge. The mother died in Morristown, Morris Co., New Jersey when the latter was  but eight years old.

Fred Augustus Trowbridge, descending from such a splendid pioneer and advanced stock on both the paternal  and the distaff side, has behind him a tradition of success, and it is little wonder that he accomplished and built  up in such a short time the largest, best equipped and most up-to-date sporting goods concern in Morris county.  When yet a small boy his father moved from Morristown, Morris Co., New Jersey to Boonton. He attended

the public school of the latter place, and in due time graduated from it. In 1888, being then eighteen years old, he returned to Morristown, Morris Co., New Jersey, his birth place. Here he learned thoroughly, he does  everything thoroughly that he undertakes, the carpenter’s trade under George A. Mills. In 1892 he went to New  York City, and engaged in business. The homing instinct, as well as business acumen, carried him back to  Morristown, Morris Co., New Jersey in 1898. He purchased the nucleus of his present business, and from  somewhat of an insignificant beginning he has enlarged, increased and advanced it until the F. A. Trowbridge  company is the largest and best equipped sporting goods concern in Morris county. By splendid executive  ability, close attention to every detail, even the most inconsequential, the desire to please and accommodate his  numerous patrons, by carrying a superior line of sporting goods he has succeeded in establishing himself in an enviable position in the commercial world, at the same time commanding the admiration and respect of his  competitors. His artistic letter head reads: "F. A. Trowbridge Company, (Incorporated). Everything in sporting  goods. Automobiles and supplies." He has added an extensive garage to the rear of the store, which has met  with untoward success and fills a long felt want. He is sustaining the traditions of his family for being a  pioneer, a progressive business man and up-to-date in every respect. In politics Mr. Trowbridge is a Democrat, voting with his party; in religion, he and his family are members of the Methodist Episcopal church. He is  regarded as one of the leading citizens of Morristown, Morris Co., New Jersey, and is foremost in all that  pertains to the public welfare. He is a Mason, being a member of Lodge No. 188, Morristown, Morris Co.,  New Jersey; a ,member of the R. A.; of the B.P.O.E., the I.O.H., has been a member of the Resolute Hook and Ladder Company for twelve years, and is an ex-chief of the fire department. He is a veteran of Battery A,  National Guard of New Jersey, and is much interested in a Veteran Association, for which he works  indefatigably.

He married in Boonton, October 7, 1897, Nellie Augusta Salmon, a daughter of ex-Congressman Joshua S. Salmon, who died, May, 1892, aged fifty-six, and his wife, Deborah (Emmons) Salmon, also of a distinguished  family, and who is now deceased. Mr. Salmon was an honored and distinguished citizen of Boonton for forty years, and upon him was conferred many honors by his admiring constituency. To Mr. Trowbridge and his wife have been born two children to perpetuate the name of Trowbridge and keep alive its best traditions: Marian  Augusta, born Jan. 10, 1901, and Robert Salmon, born Jan. 1, 1903.