The History of Fort Wolcott 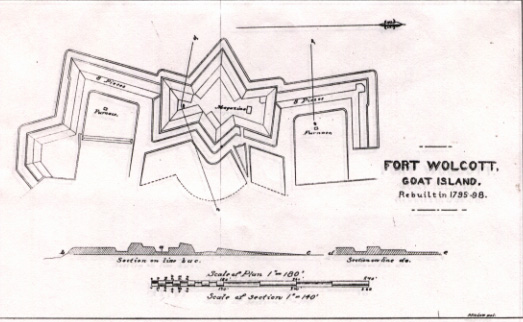 Plan of Fort Wolcott from
Historical Sketch of Fortifications of Narragansett Bay
by George W. Cullum, 1884

Fort Wolcott (one of several names of forts built on Goat Island in Newport Harbor) was was the primary fort protecting Newport, Rhode Island from 1703 until 1836. It served, at various times, the Rhode Island colonial militia, the British Army, the French Army and the United States Army.

Fort Wolcott's history began on May 6th, 1702 when the Rhode Island General Assembly voted the following resolution - "There shall be a fortification or battery, built at the charge of this Colony, in some convienent place near the harbor of Newport, aforesaid, sufficient to mount therein twelve pieces of ordinance, or cannon." (Records of the Colony of Rhode Island, Vol. 3, pg. 445.)

Over the course of the next year a fort was built on Goat Island which commanded the entrance to Newport Harbor. This position not only controled the harbor itself but its approaches as well. It was named Fort Anne after the current Queen of England.

Between times of crisis the fort fell into disuse and disrepair. In June 1721 the assembly voted that the interest for the next five years on 40,000 pounds, raised by bills of credit, would be applied to rebuilding and repairing Fort Anne.

Fort Ann was rebuilt and renamed Fort George and it is first refered to as Fort George in June of 1732.

In 1733 a committee was appointed to procure 400 pounds worth of cannon and other equipement for the fort.

In February 1740 Colonel John Cranston was appointed captain of the fort. He was assisted by a lieutenant, a gunner and eleven men who served at the fort full time as well as another 38 men who could be called to the fort in an emergency.

In 1745 renowned architect Peter Harrison was paid 75 pounds for preparing two sets of detailed plans of the fort. One was sent to the King and the other was for the Colony's governor. Harrison also prepared a plan for a new fort to be built to replace Fort George which was never built. Harrison's design was a semitrical 5 bastioned fort which embodied the fortification design principles of the French military engineer Marshal Vauban. The fort was probably not built due to the high cost of constucting such an elaborate fort.

On December 23, 1752, Samuel Freebody, a recent past commander of Fort George, held the "Turtle Frolic", at Fort George. It is said that a friend of Freebody shipped him gifts of a giant sea turtle and a keg of limes from the Carribean. The limes, intended to be mixed with rum and sugar to create punch, spoiled en route, but the sea turtle arrived in good shape and was soon used to make soup. The Turtle Frolic has been re-enacted in recent years at the hotel on Goat Island. (See Reminiscences of Newport by George Champlin Mason.)

A report made on June 10th, 1754 found that Fort George had a total of 36 cannon (12 in the fort itself and the other 24 on the outer batteries) and a total of 1,711 cannonballs. This made Fort George one of the most formidable forts in the colonies.

In December 1774 the assembly voted to remove all cannon from Fort George except for two 24-pounders and one 6-pounder. The other guns were sent to Providence. This was apparently in anticipation that the British would soon occupy Newport and preserve Fort George's arsenal for the colonists.

At the outbreak of the American Revolution it was imperative to bring Fort George (soon renamed Fort Liberty by the patriots) into readiness. Militiamen mounted cannon at the Fort and waited for an attack which never came. 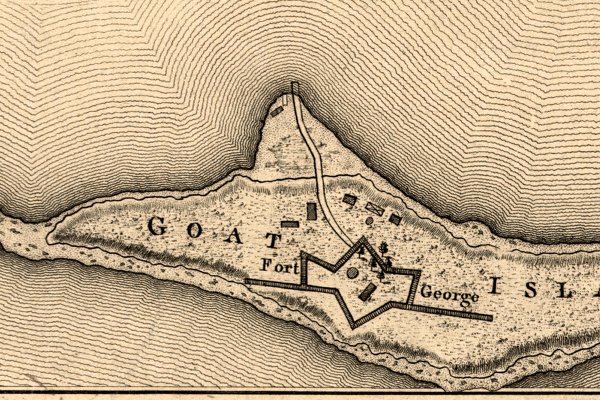 Fort George from Map of Newport surveyed by
Charles Blaskowitz in 1777.

In November 1776 the British Army occupied Newport and reclaimed the fort for the Crown. There was no resistance by the locals because they knew it would be futile in the face of such a large force. The British, of course, refered to the fort by its previous name of Fort George.

French Map, circa 1780, showing the defenses of Newport Harbor.

The British evacuated Newport in October of 1779 leaving the fort to be used by the French Army which occupied Newport from July 1780 until June 1781. Why the fort was not destoyed by the British before their departure remains a mystery.

15-Star "Star Spangled Banner" Flag
(Note - This flag was the official flag of the United States from 1795 until 1820.
It flew over Fort Wolcott for most of its service as a United States fort.)

That same month a committee appointed by the General Assembly suggested that a gunner and four "stout" boatmen be employed to take care of the fort. (Ibid. pg. 144.)

In October 1791 the assembly appointed another committee was appointed to consider dismissing "all or any part of those now employed at the fort". (Ibid. pg. 445.)

On July 4th, 1793 a fifteen gun national salute (one gun for each state) was fired from the fort to mark the 28th year of independence. (Newport Mercury, July 5th, 1793.)

In March 1794 the State of Rhode Island passed an act which granted "to the United States all the right, title, and claim of said State to the lands on which the fortifcations on Goat Island stand, etc." This was part of a program called the "First System" of fortification which was to provide for the defense of major ports in the United States. (Op. Cit.)

In May 1794 the Newport Artillery Company mounted a 24-pounder cannon at the fort. This was the first gun mounted at the fort since its rebuilding in 1794 as part of the "First System" of American fortification. (Newport Mercury, June 1st, 1794.)

As of July 9th, 1794 the fort was garrisoned by a company of artillerists and engineeers (the two branches would be divided in the near future) commanded by Captain William Littlefield, a native Rhode Islander. Littlefield commanded the fort until he resigned from the Army in 1800. On July 14th Littlefield took out an advertisement in the Newport Mercury looking for men between the ages of 18 and 35 to enlist in the Corps of Artillerists and Engineers for 3 years offering pay of 8 dollars a month. (Mercury, July 15th, 1794.)

In 1798 the fort was renamed Fort Wolcott in honor of Oliver Wolcott Sr. (1726 - 1797). Wolcott was a signer of the Declaration of Independence, served as governor of Connecticut (1796 - 97) and was a Major General in the Connecticut Militia during the Revolution. His son, Oliver Jr., was Secretary of the Treasury during the Jefferson administration and would also serve as Connecticut's governor. 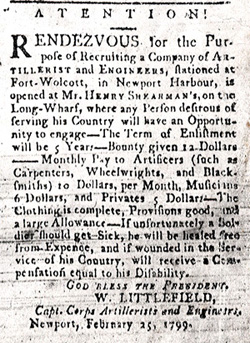 From 1794 until 1836 Fort Wolcott was usually garrisoned by a company of about 50 artillerymen and mounted about 30 cannon.

During the War of 1812, Fort Wolcott was the primary defense for Newport Harbor. In 1814 the state of Rhode Island sent Woods State Corps (under the command of Major John Wood) to Fort Adams and sent the Newport Artillery Company to garrison Fort Green in the city's Point section. (Fort Green was on the site of what is today known as Battery Park.) The commander of Fort Wolcott was Captain Julius Heiliman who was also in overall command of the defenses of Newport.

Chapter 12 of Lossing's Field Book of the War of 1812 (published in 1869) makes the following comments about Fort Wolcott during the war - "Fort Wolcott, near Newport, Rhode Island. – Built of stone cemented with lime. Had a brick and stone magazine, a sally-port and ditch, reverberatory furnace. Supported by two wings or bastions, both facing the harbor. Revetments in stone laid in lime cement; parapets supplied with sod-work; the batteries intended for ten pieces of cannon. Had five pieces, 32-pounders each. Barracks two stories high, composed of brick, and bomb-proof." 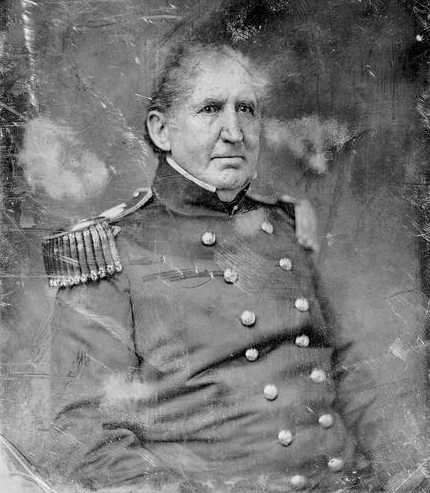 Colonel Ichabod B. Crane, circa 1840's
(Note - This is the only known photograph of a commander of Fort Wolcott.)

From about 1819 until 1825 Fort Wolcott was commanded by Captain (Brevet Major) Ichabod B. Crane (c. 1789 - 1857). Crane was originally commissioned as a lieutenant in the Marine Corps in 1809 but resigned in 1812 to become an Army artillery captian. Crane's son Charles (1825 - 1883) was born in Newport and would become the surgeon general of the Army in 1882. The elder Crane was appointed commander the First Artillery Regiment in 1843 and would serve in that capacity until his death in 1857.

(The reader will note that Crane shared the name of the protagonist of the famous story The Legend of Sleepy Hollow published by Washington Irving in 1820. As Crane was commissioned from the state of New York, where Irving lived, it is possible that Irving borrowed Crane's name when he wrote the story.)

In 1824 construction was started on the new Fort Adams which would become Newport's primary fort when it was garrisoned by the Army in 1841. The new fort was so grand that it eclipsed Fort Wolcott in the minds of those who studied the defenses of Narragansett Bay which contributed for Fort Wolcott's being forgotten within a couple of generations.

Some time between November 1827 and November 1828 Brevet Major Mann Page Lomax of the 3rd Artillery began the longest (and last) tour of duty as the commanding officer in the history of Fort Wolcott. 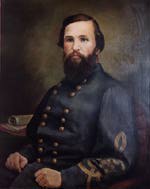 Major Lomax was a native of Virginia and his wife gave birth to a son named Lunsford Lindsay Lomax in 1835. Lunsford would graduate from West Point in 1856 and served in the Army unitl his resignation in April of 1861 from the Army to join the Confederacy. By the end of the war he had risen to the rank of Major General in the Confederate States Army and commanded a cavalry division in the Army of Northern Virginia. After the war, he served for five years (1889 - 1894) as the president of the Virginia Agricultural and Mechanical College. He died in 1913.

Fort Wolcott was garrisoned until May 22nd, 1836 when the Major Lomax's company was transferred to Florida to fight the Seminole Indians. This marked the end of Fort Wolcott's service as a garrisoned fortification.

For many years Fort Wolcott was abandoned. It undoubtedly became a haunt for thrill seeking boys and lovers seeking seclusion. Although it was probably considered a secondary fort to supplement Fort Adams in time of war it was never again used as an active fortification.

In 1869 Fort Wolcott and rest of Goat Island was transferred to the Navy for use as the Naval Torpedo Station. The torpedo station was the primary research facility and factory for most of the Navy's torpedoes through the second world war.

Over the years, as new buildings were built for the torpedo station, the old fort was dismantled. Some remains were still visible as late as the early 20th Century but these, too, were proabably destroyed as the torpedo station expanded during the First World War.

The torpedo station was active through the Second World War and was finally disestablished in 1951.

See the History of the Naval Torpedo Station for more information. 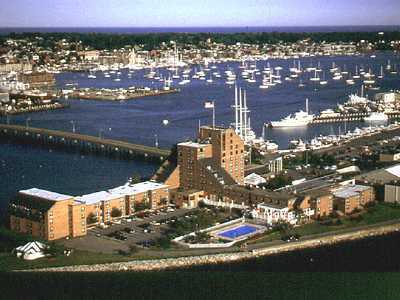 During the 1960's almost all the torpedo station buildings on Goat Island were leveled. In 1970 a new era in Goat Island's history was begun with the construction of the Sheraton Islander Hotel (today known as the Hyatt Regency Newport). Other parts of the island were redeveloped as condominiums and marinas.

It is ironic that the site of an old fort would be occupied by luxury accomodations. It is also fitting. Fort Wolcott's original purpose was to protect Newport from its enemies and secure the blessings of peace and prosperity for future generations. In this sense, the fort's mission has been accomplished.

Note - Newport was occupied by the British from December 1776 until November 1779. The fort was renamed Fort George during this period.

Note - On April 1st, 1802 the two companies at forts Wolcott and Adams were consolidated into one company at Fort Wolcott. The Regiment of Artillerists was organized the same date.

When Forts Adams and Wolcott were both garrisoned there was sometimes a senior officer in command of both forts. Those known to have served in this capacity are as follows:

Center for Fort Preservation and Tourism