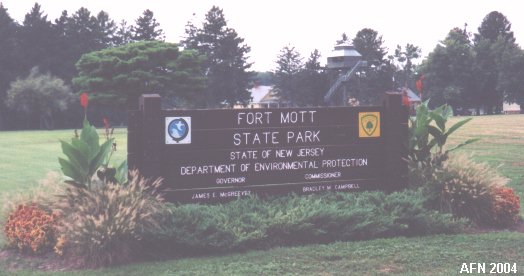 A Confederate POW cemetery was created here in 1863. The POWs were held in Fort Delaware. Earthwork fortifications were also built here for ten (15-inch and 10-inch) Rodman guns on wooden carriages and platforms. Finns Point Battery was first located here in 1872. Only two gun emplacements and five magazines in the mortar battery were completed before construction was halted. Two 1872 magazines remain, and one was used again during the Endicott period. It has an early observation post on it. The current fort was created in 1897 beginning with a "6-gun battery" which eventually became Batteries Harker and Arnold. Along with Fort DuPont, it was built to compliment Fort Delaware. Fort Mott was named for Major General Gershom Mott of New Jersey. He served in the Mexican War and rose through the ranks during the Civil War. Mott resigned in 1866, and died in 1884. The Peace Magazine was built in 1904. Endicott batteries here are the combined Battery Arnold (1899 - 1943) and Battery Harker (1899 - 1941), Battery Gregg (1901 - 1910), Battery Krayenbuhl (1900 - 1918), and Battery Edwards (1902 - 1920). Battery Commander stations were later installed in the gun emplacements on Batteries Krayenbuhl and Gregg. Battery Edwards' casemates were constructed from two of the original 1872 magazines. Two steel observation towers are located here. The one by the river was built in 1902, and the one by the park office was built in 1903 (renovated 2002). The fort was on caretaker status beginning in 1922. Three of Battery Harker's guns were sold to Canada in 1941. Two of those are on display at Fort Cape Spear in Newfoundland. The other was sent to Fort Prével in Québec. The Army moved Fort Mott's officers quarters via barge to Fort DuPont in Delaware. Parvin State Park (about 30 minutes east near Vineland) was a German POW camp during WW2. 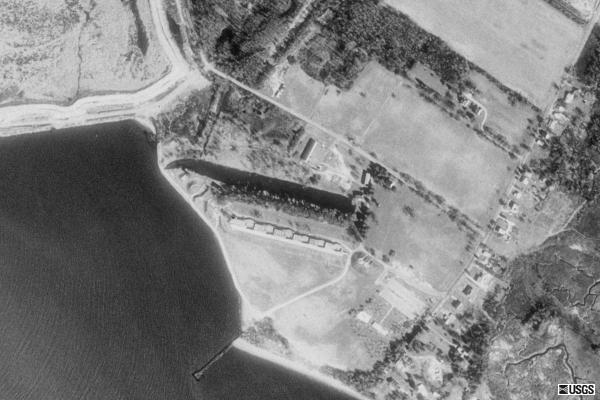