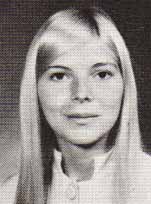 The following obituary appeared in the Orlando Sentinel on June 6, 2004:

SANCHEZ, SHEILA, 51 of Panama City Beach, passed away Friday, June 4, 2004, at her home. Sheila was a native of Dade City, FL, and had been living in Bay County for the past 24 years. Sheila was employed as a superintendent with the City of Panama City City for fifteen years. She was Catholic by faith. Sheila was the beloved wife of Jorge Sanchez of Panama City Beach, FL, beloved mother to her daughter Rebecca Kimbrough of Panama City, FL; four grandchildren Sidney Lane, Stephan Lyle, Brandon James and Rex Allen; three brothers Gerald Heidgerken, Michael Heidgerken, and Patrick Heidgerken; a sister Kathy Veal. Family and friends are welcomed to attend a celebration of life held in memory of Sheila, at the Sanchez home, 2PM Saturday June 12, 2004. In lieu of flowers the family request that donations may be made to Covenant Hospice, 107 W. 19th Street, Panama City, FL 32405. One of Sheila's greatest desires was for people to become aware of and support the National Foundation of Organ Donation. Yorkshire Cremation & Casket Society 3704 West 23rd Street - Suite C, Panama City, FL 32405 (850) 913-8817.