Hartshorne Woods Park (pronounced "harts-horn") is a 736 acre Monmouth County Park. Located at the Rocky Point section of this park, is the site of a US Army Coast Artillery post and later a Highlands Army Air Defense Site (HAADS) connected to nearby Fort Hancock. The former military base occupied 224 acres on a high promontory near the Navesink Twin Lighthouses. Located here is Battery Lewis and its Protected Switchboard Room (also called the Plotting and Spotting Room or PSR), Battery 219, and a Fire Control Station. When the Coast Artilley disbanded, the site became the home of the NIKE-Hercules control center for the missile batteries and radar systems established on Sandy Hook. Nothing remains of this control center except an empty field. A mortar battery, Battery Hartshorne (1917 - 1920) is located at the nearby Henry Hudson High School, but it is now buried. {see "American Seacoast Defenses" 2nd Ed. page 134} 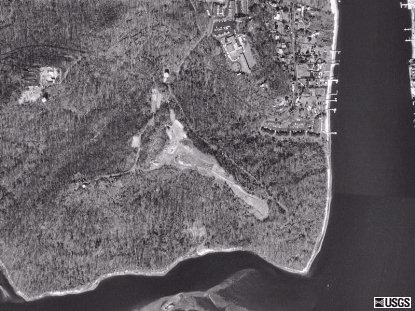