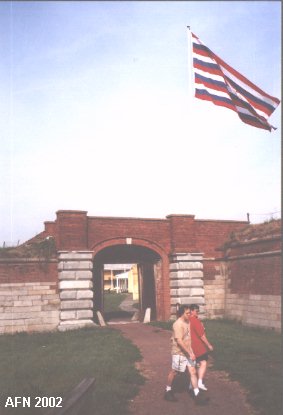 NEW TO THIS SITE:
GPS coordinates for most of the featured sites!
I used WGS 84 except were noted by "USCGS" or "USACE."
Those marked "USCGS" or "USACE" use NAD 83 and are listed at
http://www.geocaching.com/mark/.
The accuracy between WGS 84 and NAD 83 is slightly off,
but should not cause you any difficulties in finding locations
since many GPS devices allow you to switch between them.

Fort Mifflin was built beginning in 1772 and originally called Fort Island Battery, also known as Mud Island Fort until construction was finished in 1777. The previous defense of Philadelphia came from Association Battery, a few miles north on Society Hill, when guns were placed there in 1750. The British & Hessians captured the fort, and also Fort Billings at Billingsport (Paulsboro) NJ, in 1777 and virtually destroyed them. The Patriots escaped to Fort Mercer, across the river in Red Bank, until that fort also fell. The British had built seige batteries at Webb's Ferry, Mingo Creek, and five on Province Island. The forts were rebuilt in 1779 after the British left Philadelphia. Fort Mifflin had three new wooden blockhouses, barracks, officers' quarters, magazines, surrounded by a palisade. A Water Battery was also built. Fort Mifflin was rebuilt again in 1794 - 98 with Pierre L'Enfants plans. It was virtually abandoned from 1815 - 1837. Fort Gaines (1814 - 1820?) was built on Middle Bank, just upriver from Fort Mifflin, in the closing days of the War of 1812. It was a temporary work. Fort Mifflin was used as a military prison during the Civil War. It was dismantled in 1904 but was restored from the original plans in 1930. The site had then been used as a Naval Ammunitions Depot, until transferred to the state. The marsh islands around the area were filled in to build the airport and interstate highway 95. No trace remains of Fort Gaines or the 1777 British seige batteries. Admission fee.

This was an earthwork fort with 350-yards of earthen outer works. The Patriots surrendered to the British in 1777, who then abandoned it. The Patriots gained it back in 1778 and rebuilt it. Located across the river from Fort Mifflin, PA. A coastal battery was planned here in 1872. 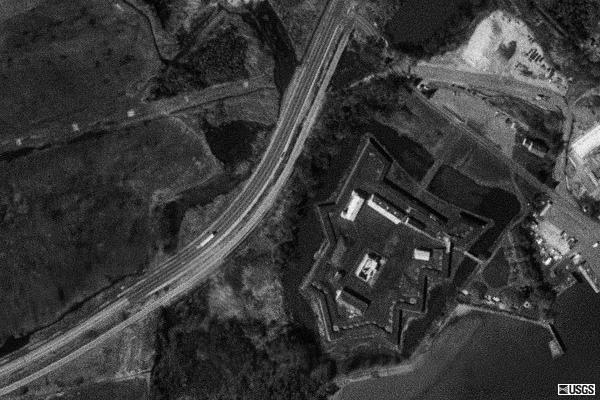